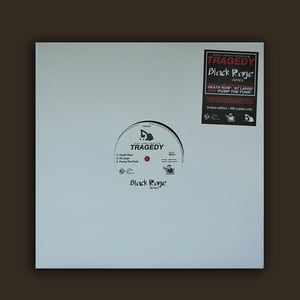 With a recording career spanning 25 years, Queensbridge rapper Tragedy is one of the undisputed hip hop pioneers, from his earliest work as part of the Superkids, Juice Crew collaborations and his ten solo albums released between 1990 – 2007.

In late 2009, our pal Canns (of Iller Regime) got in contact with us regarding a 3 track chrome cassette entitled ‘Selections from Black Rage’ he had acquired, at which point we started making contact with Trag’s camp. We eventually hooked up with Trag’s right hand man - DJ Phantom and set up an agreement to put out a project in conjunction with Trag’s 25 To Life Aura imprint.

The dark production on the original version on ‘Death Row’ featured on DWG009 captures the depressing scenario of being locked up – “I guess I never had friends, my lawyer took my ends and the bitch got the Benz”. ‘At Large’ is another track which is superior in its original mix with pounding organs and a lashing of ESG’s ‘UFO’ setting the frantic pace of the track – “knife inserterer, fear instiller, I’m better known as a political killer”. ‘Pump The Funk’ (originally named ‘Shit For Your System’) has a totally different stripped-back arrangement for the jeeps. Flip the wax over for the versions you will already know... Can you spot the differences?

As most will know, this release sold out quickly as soon as we dropped it. As a rule, we don't sit on secret boxes of product and trade them on the black market: when a release is sold out, it's sold out.

The first 75 copies were on red vinyl, whilst the remaining 175 were on black vinyl.

These red copies are from our personal allocation of 3 copies each.